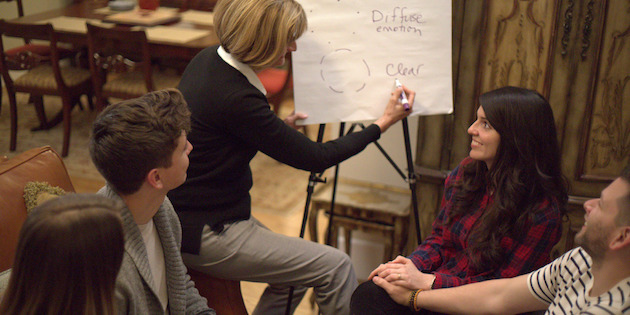 Sharon Hargrave, a licensed marriage and family therapist specializing in couples, families, and intergenerational issues, is the Executive Director of the Boone Center for the Family, an organization established by Pepperdine University in 1996 as a supportive force to help strengthen and promote healthy families.

"Pepperdine prides itself on its Christian heritage and its commitment to fostering healthy moral relationships leading to strong marriages and families," says president Andy Benton. "As such, we are blessed to have acquired the skills and talents of such an accomplished marriage and family expert as Sharon. We are confident that she will both strengthen and enhance the Boone Center's mission."

Sharon also teaches as an affiliate professor in the Marriage and Family Therapy department at Fuller Theological Seminary, where she founded the RelateStrong program (formerly known as MarriageStrong). As executive director of the Boone Center for the Family, Sharon continues in her role with RelateStrong. Through her work with the Center and Fuller Theological Seminary, she has been successful in receiving funding from foundations, grants, and private donors.

A California native who grew up in Texas, Hargrave holds a bachelor's degree from Biola University and a master of arts degree in Marriage and Family Counseling from Southwestern Baptist Theological Seminary in Fort Worth, Texas.

Sharon and her husband, Terry travel and speak nationally and internationally about marriage, forgiveness, and aging and caregiving to both professional audiences and various church and religious organizations. The Hargraves have two adult married children and recently begun the joyful journey into being grandparents.

Terry Hargrave, PhD, is a Professor at Fuller Theological Seminary in the Marriage and Family Therapy Department. He is nationally recognized for his pioneering work with intergenerational families. He has authored numerous professional articles and written 13 books including The Essential Humility of Marriage, Restoration Therapy: Understanding and Guiding Healing in Marriage and Family Therapy, Five Days to a New Marriage and Five Days to a New Self. He has presented nationally and internationally on the concepts and process of family and marriage restoration as well as other topics including forgiveness and aging.

He has been selected by the American Association for Marriage and Family Therapy as a national conference plenary speaker and a Master's Series Therapist. He and his wife, Sharon, have two adult married children and recently began the joyful journey into being grandparents.